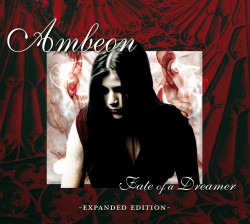 After being out of print for several years, AMBEON “Fate of a Dreamer” is going to be reissued in a brand new, expanded edition! Originally released in 2001, Arjen’s mysterious and ambient AMBEON project features the amazing vocal talents of Astrid van der Veen, who was only 14 years old at the time of recording. The new expanded edition of “Fate of a Dreamer” is a 2-CD digipack that includes all of the tracks from the original AMBEON release, the bonus tracks from the “Cold Metal” single, plus 14 never-before-heard acoustic versions of Astrid singing a selection of Ambeon and Ayreon tracks.

There are still some details pending regarding release dates, etc., but we’ll get back to you soon with information about how you can pre-order signed (or unsigned) copies. Pre-orders will be running through other merchants as well, but signed copies will be available exclusively through us. Until then, feel free to stop by Arjen’s Facebook page for up-to-the minute info!